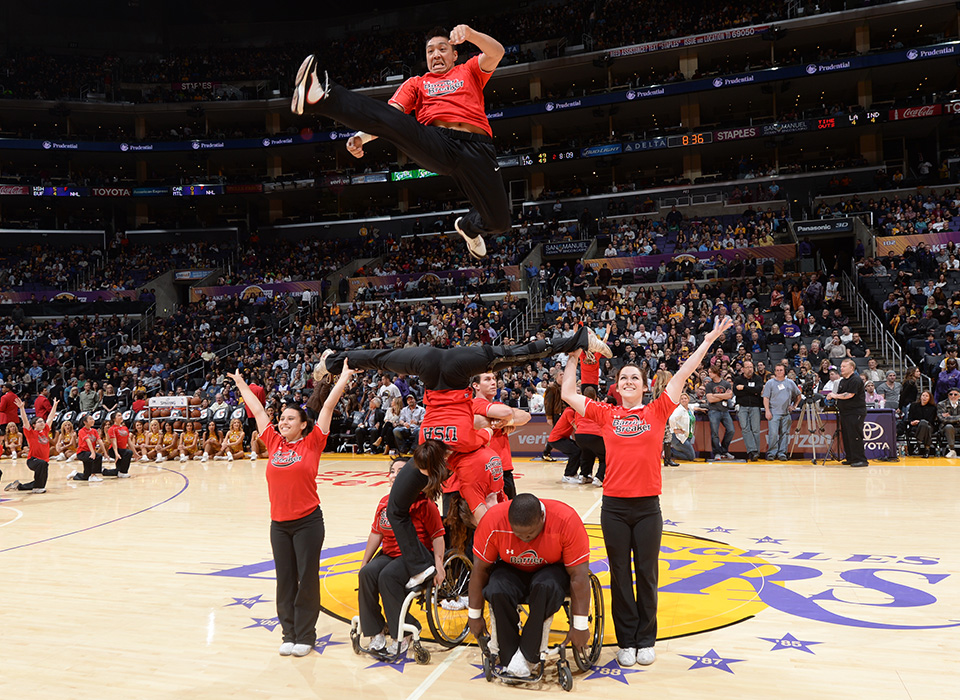 Break the Barrier utilizes the power of inclusion to bring out the best to the students.

We  utilize several performing teams to show, rather than tell audiences just what can be achieved with the power of inclusion.  These teams are made up of performers of varying ages, backgrounds, skills, and abilities.

The International Barrier Breaker team demonstrates inclusion through gymnastics, dance, martial arts, stunts, testimonies, music, workshops, seminars, and more. The common thread all Barrier Breakers share is that they do not see differences in people. When they see someone in a wheelchair or with Down syndrome, they do not feel sorry for them because they know God has given everyone gifts and abilities. The Barrier Breakers have softened hearts, opened eyes for ability awareness, and generated hope for people and families, both nationally and internationally. The U.S. Department of Education and U.S. Department of Special Education recognized the team as the “National Role Model for Inclusion.” The Barrier Breakers have performed at numerous venues including the Billy Graham Crusade, Los Angeles Lakers basketball game, San Francisco 49ers football game, Oakland Raiders football game, Sacramento Kings basketball game, and on the steps of our nation’s capitol in Washington, D.C. The team has also been requested by numerous international governments, including Romania, China, Canada, South Africa, the Dominican Republic, India, Australia, Peru, the Philippines, and Guatemala. Because of the outreach of the Barrier Breakers, government policies have been changed and over 100 million lives have been impacted worldwide.

To join the team, students must be invited by a coach, must qualify by having the required skills, and must try­out for the team each year. Cost is $127/student per month.

The Jr. Team is Break the Barriers’ youngest group of performers, with ages ranging from 6­ to 14 years old. This special group of energetic performers demonstrates inclusion with gymnastics, dance, sign language, and partner stunts. Both teams perform together at school carnivals, churches, Fresno State basketball half times, and other community hosted events. Their desire is to help make each other shine and work as a unified team.

To join either team, students must be invited by a coach, must qualify by having the required skills, and must try­out for the team each year.

Break the Barriers’ dance team is made up of all ages and abilities and we incorporate many genres of dance, as well as dance on wheels and expanded sign language­ based movement. These select dancers perform at many different community outreach performances each year. Their mission is to spread awareness of inclusion and to celebrate ability.

The dance program enlists dancers to join Break the Barriers’ Dance Team by audition or invitation.

There are currently no events

Ever since his first visit to Break the Barriers, Braxton has excelled and mastered many different skills, including a round-off back-tuck.

We strive to prepare our staff to effectively work with and teach children of all abilities to be in a class with other students. All staff are required to attend workshops where they:

Thank you to our MAJOR sponsors

are you ready to break barriers?

Take a Look Inside